Get to Know Nelson Nash – Father of Infinite Banking Concept

Nelson Nash outlined the Infinite Banking Concept for achieving financial independence that helped many people change their entire life and their financial system. 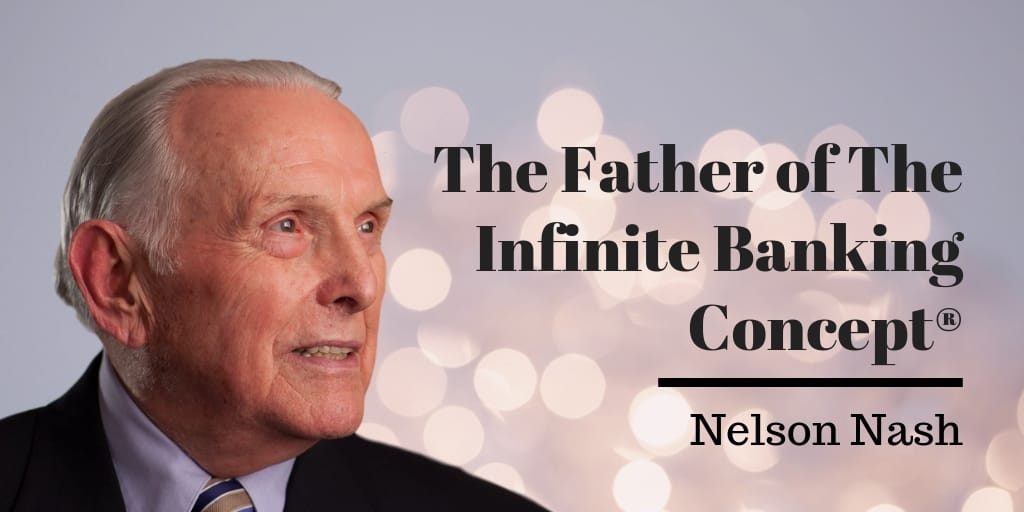 In today’s article, we will help you get more familiar with the persona of Nelson Nash and the certain principles of becoming your own banker and the Infinite Banking Concept. We will take a closer look at:

Nelson Nash is the author of 5 stars publication: “Becoming Your Own Banker” and the creator of the Infinite Banking Concept. Nelson has spent decades as a tireless advocate and an activist for liberty, free markets, sound money, and the Austrian school of economics.

He discovered and developed the Infinite Banking ConceptTM using these principles and values. R. Nelson Nash found IBC in the early 1980s when he was struggling with high-interest rates on commercial bank loans.

One of the most famous quotes said by Nelson Nash is, “The very first principle that must be understood is that you finance everything you buy–you either pay interest to someone else or you give up the interest you could have earned otherwise.”

Nelson Nash has been a lifelong supporter and student of the Austrian School of Economics, which he learned about from Leonard Reed, the founder of the Foundation for Economic Education.

A Few Words About Infinite Banking

Every one of us dreams about cutting the cord from the commercial banks and creating our own banking system without the help of so-called financial experts. If you are not the financial professional, you may be scared about the entire financial world. And that is why you should discover all about the Infinite Banking Concepts and the idea of becoming your own banker.

The infinite banking concept simply allows you to take control of your personal finance needs by retaining cash in your whole life insurance policies that would otherwise be paid to a third party, thereby increasing your cash value over time.

However, before we get into the details about Nelson Nash and becoming your own banker, you need to learn a few most basic definitions and phrases to indeed turn into one of the financial professionals.

And other benefits such as:

If you buy whole life insurance and the company you bought it from makes a profit for the year, all of the profit is returned to the policyholders in the form of dividends. This is known as a Premium Return. The advantage of this type of investment is that you are not being taxed on these dividends. You are only being paid a dividend by holding a whole life insurance policy.

Becoming Your Own Banker

Becoming your own banker is a simple system that is supposed to allow you to take advantage of the Infinite Banking Concept in order to increase your funds. It is a concept that will enable you to withdraw or borrow funds from your life insurance policy rather than going to a bank or other people or institutions for the same service.

Who is Nelson Nash?

Nelson Nash was a very experienced man with extensive banking, life insurance, and real estate background. After some financial perturbations, he found himself analyzing and trying to develop the best and most efficient investing strategy.

The inventor of the Infinite Banking Concept was born in the year 1931. He passed away on March 27, 2019, at the age of 88, due to his heart disease complications.

Nash began his career as a private consultant in the forestry industry. In 1952, he earned a B.S. in Forestry from the University of Georgia. Nash worked as a Consulting Forester in eastern North Carolina from 1954 to 1963. A year later, he switched entirely to the life insurance industry.

Nelson had been a Life Insurance Agent for over 35 years. During this time, he was employed by The Equitable Life Assurance Society of the United States and The Guardian. Nelson has been named an Equitable Hall of Fame Member, a Chartered Life Underwriter, and a Life Member of the Million Dollar Round Table.

Nash was deeply committed to shifting financial independence away from lenders and toward consumers. He has spent the last 20 years empowering people to take control of their personal finances and teaching them how to use infinite banking in everyday terms.

Additionally, during his 30 years of military service, Nash flew with the Army National Guard and earned Master Aviator Wings. For 71 years, he was a licensed pilot.

‘Becoming Your Own Banker.’

‘Becoming your own banker’ reveals secrets about using a dividend-paying whole life insurance policy. If you wonder if you should read Nash’s book, then we can answer quickly – yes. Written originally as a textbook designed to correspond with a video course, the book contains the financial blueprints of the life insurance industry and shares important secrets about, for example, five methods of financing automobiles or designing an insurance plan that solves the banking function potential sources of capital playing.

We can easily discover that Nash’s publication left a positive impact on the audience, raising all 5 stars in reviews.

Nash’s book is not the only one that is worth 5 stars. The same thing can be said about the Nelson Nash Institute. It was founded to bring Nash’s revolutionary and liberating ideas to the general public and financial professionals interested in using infinite banking in their own business.

Nash teaches individuals and business owners how to use dividend-paying whole life insurance policies to liberate themselves financially.

An Infinite Banking Concept seminar is held at the Nelson Nash Institute by financial professionals. These are held on a regular basis across the country.

The Nelson Nash Institute (NNI) has a plethora of educational YouTube videos. Some people retain more information from a video than from a book. As a result, Nash had the foresight to videotape his speeches. Many conversations with Nelson Nash were also recorded.

More About the Infinite Banking Concept

This method is also referred to as “becoming your own banker.” Learning about this concept could be life-changing in your retirement planning and secure your financial future. Continue reading to learn how to make more responsible financial decisions and improve your financial situation.

Infinite Banking allows you to operate and borrow money the same way a traditional bank does, but without relying on a third party or other financial institutions, except for one insurance company. You will be a creditor as well as a lender.

Instead of borrowing from a bank, you borrow money against yourself and your death benefit and control your cash flow while still allowing your permanent life insurance policies to earn dividends even though you are using that capital elsewhere.

In other words, you accumulate wealth by borrowing and repaying funds held in the cash value of your permanent life insurance policy via employing dividend-paying whole life insurance.

One of the most significant advantages of whole life insurance policies is that you will never have to deal with the banking system, fees or loan interest rates. You can borrow as a policyholder by using your policy’s value.

You would never have to borrow from commercial banks again if you used this borrowing setup. Instead, you would borrow for yourself (via your whole life insurance policy) and pay yourself back over time. As a result, you are your own bank.

Infinite Banking’s goal is to replicate the process as much as possible to increase the value of your own bank. The lending and repayment of money occur during the duplication process.

Infinite Banking enables you to better work towards your individual and unique financial goals for yourself and your family and have control over your finances without having to deal with banking fees or loan interest rates. In other words, getting involved with the Infinite banking business opens a whole new world of possibilities.

You gain financial freedom, so-called personal liberty and control of your finances by borrowing for yourself, repaying, and so on – simply by being your own bank.

Implementing this banking strategy into your life gives you much better control over your finances and allows you to build wealth through the life cycle.

We hope we brought the father of Infinite Banking – Nelson Nash, one of the brightest financial experts, to your attention and sparked an interest in you to discover more about being your own banker.

At Wealth Nation, we’ll show you how to achieve financial success by using your whole life policy to manage, create, use, and grow your money entirely independently. Sign up for Wealth Nation and become one of the financial professionals!